I just completed a great book by Rand Fishkin (formerly of Moz now the head of SparkToro) called Lost and Founder. The book (I highly recommend it) is a personal message to anyone who is looking to be part of the start-up world – as an employee or founder.

One interesting chapter in the book is appropriately titled “If Management Is The Only Way Up, We Are All F’D.” In the chapter Rand discusses his views on developing managers and creating management structures within a start-up (in his case it was how he built Moz to a $45 million marketing analytics software firm.

One area that I found very interesting was Rand’s exploration on why developing career pathways for individual contributors makes great business sense.

There is a deeply held misconception in business culture that people management is (a) the only way to lead and (b) the only way to advance one’s career. If we address both of those, dismantle them, and create clear, obvious paths to prove that this isn’t true in our organizations, we can build better teams composed of the right people properly suited to the work (management and IC - individual contributors).

Rand discusses how he created a dual-tracked career pathing system at Moz modeled after successful career pathing systems at Google and Microsoft. What all of these firms saw was that they were able to develop high-quality engineering and technical talent by the individual contributor's options to grow without having to cross professionally over to managing people.

According to Rand, the big challenges in creating dual-track career system is to build with: 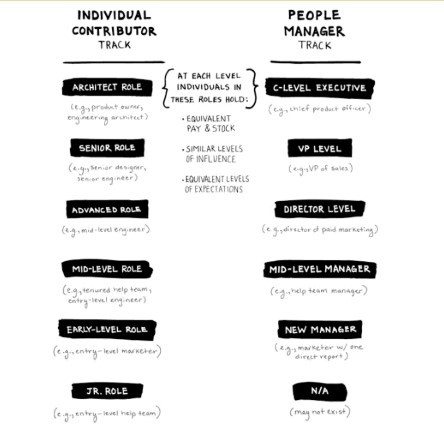 Why do I like this? The chart on the left is from Rand Fishkin.

Not everyone is a good manager. The dual career track system takes the pressure off from people who are great performers but are not manager material.

This system recognizes that leadership does not equate to managing people.

This system also encourages and support individual contributors to continue to deepen their skills and expertise as subject matter experts. Too often highly skilled practitioners are wrongly pushed to become managers because that is the pathway to success.

Here is a great story from somone who has succeeded as an individual contributor. Pamela Vaughn, a Principal Marketing Manager, Web Strategy for Hubspot, shared her story in an article titled: "How I Managed To Grow My Career Without Managing People". In the article, Pamela talks about how she never saw the appeal of being a manager and wanted a career where she would be judged by her results alone. She was able to transition into the content marketing department where she found her calling - writing blogs and managing the editorial content strategy for the Hubspot marketing blog.

As her career developed, Pamela chose to take on more challenging projects and assuming greater editorial responsibility while still remaining an individual contributor.

But I’m not going to lie … it hasn’t always been easy. While the HubSpot marketing team has always valued, challenged, and rewarded its individual contributors, it wasn’t until recently that the “individual contributor” track was officially recognized as an established, equally valuable career path alongside the manager track.

... the career growth trajectory for an individual contributor is much more ambiguous. Success varies depending on the individual work you’re doing, so it’s not necessarily clear what career growth means for different roles, or what the right path is to get there.

So I kind of just made it up as I went along. Instead of trying to map out a career path and worrying about where I was going to be in five or ten years, I followed my interests and tried not to worry too much about measuring my success in traditional ways such as title changes and promotion announcements.

HubSpot developed an effective dual career track system much like Moz and other so that great performers like Pamela Vaugh could flourish and contribute in the areas that drive her.

Pamela was able to grow her career in the way that best matched her goals rather than following the traditional manager model. As she mentions in the article:

And let me tell you, nothing convinces you that your career is headed in the right direction more than the co-founders of your company “liking” and commenting on your latest post.

Along the way, I became more and more of an expert in my craft, and it was clear that the value I delivered was a direct result of my increasing depth of knowledge. This naturally led to recognition of my achievements (and compensation adjustments) as well as leadership opportunities, both internally at HubSpot, and externally.

While I wasn’t a leader in the sense of team management, my colleagues would seek me out to pick my brain about optimization and get my perspective on the projects they were working on, and I started getting invited to speak at industry conferences and events.

Developing meaningful career paths for individual contributors allows more opportunities for employees to grow and contribute without seeing that their careers have stagnated. The truth is that everyone is not a manager and that mismatches occur when some high performers are put into managerial roles because they are looking to advance their careers.

The dual career path system also provides fluidity between roles so that individual contributors can move into managerial positions when the time is right and managers can move into contributor roles without it being seen negatively.

Patrick Lynch is the President of CMP - Southeast, a talent and transition firm in the business of developing people and organizations across the full talent lifecycle – from talent acquisition and leadership development to organization development and outplacement/career transition support.